Skip to main content
Start your Project
Be a Standardized Patient 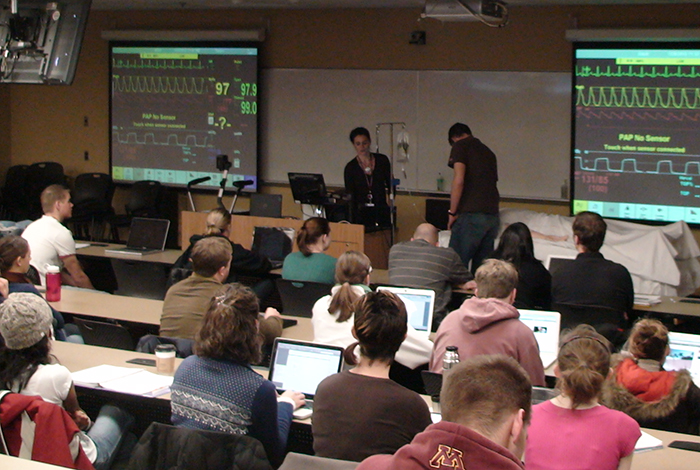 To provide a foundation for creating international leaders in the development, evaluation and delivery of medical education curricula enhanced by simulation technologies.

Once this one-year fellowship is completed, the Surgical Simulation Fellow will be facile in simulation education theory and practice and will have developed their own technical skills through an array of simulation activities. Additionally, s/he gains hands-on technical skills and research experience.

The Fellow is involved in simulation classes for medical students and residents as well as in the design and implementation of all surgical simulation activities that occur within M Simulation. The Fellow is also be involved in their choice of an array of simulation research projects by partnering with R&D faculty

Requirements
Applicants must be an MD and be enrolled or have completed a residency in any surgically-oriented field. International candidates with the intent on developing a simulation center/program in their home country are encouraged to apply.

Goals
The collective mission of the committee is to improve the quality of surgical care by developing future leaders and scholars in the area of surgical education, simulation, and training. The specific goals of the ACS AEI Fellowship Program are:

Although the Fellowship Program is relatively new, soon after its December 2012 launch a number of AEIs showed interest in applying to participate in the initiative. Initial applications were due in July 2013; staff collected the applications and committee members reviewed them in the fall of 2013.

ZICHEN ZHAO, MD - CHINA, 2015-2016
Dr. Zichen Zhao studied at Peking University Health Science Center from September of 2008 through June of 2015. His studies focused on Urology with interests always leaning towards simulation. He is well underway in the first quarter of his fellowship. He’s immersed in our medical student curricula and residency programs simulation training at the center, collecting data for his research study, and simulator design project.
Dr. Zhou actively participates in all planning and administrative meetings and worked with our faculty and staff on operational aspects of managing the simulation center.

Dr. Zhao will spend the last quarter of his fellowship at the UW Simulation Center under the direction of Dr. Sweet to experience another simulation center and complete his multi-center research project.  After completing all of the requirements of the fellowship, he will be honored with a ACS-AEI certificate through the University of Minnesota SimPORTAL Simulation Center projected in June 2016.  Upon completion of the fellowship, Dr. Zhao plans to return to Beijing and be the lead simulation director and incorporate all that he has learned during the fellowship to advance the training of the students of Peking University in Beijing China.

DOMENICO VENEZIANO, MD - ITALY, 2014-2015
Domenico Veneziano, MD is a Urologist who came to the University of Minnesota from Italy in 2013. During his time as a fellow with the ACS SimPORTAL program he developed a state-of-the-art simulator in the form of a “Fluoro-less C-Arm trainer (CAT)” to simulate percutaneous nephrolithodomy, a urologic procedure. In 2015, this simulator is was used as a teaching tool by the American Urological Association in a three-part course called “Practical PCNL” and was held at three different national institutions. It continues to be used at the University of Minnesota and beyond and is highly regarded for its realism and portability.

After completing the SimPORTAL fellowship, Dr. Veneziano has continued to publish and collaborate with Dr. Sweet and the University of Minnesota, and currently serves as the Coordinator of EUREP hands-on training for the European Association of Urology and is Medical Director at United Hospitals Bianchi Malacrino Morelli in Reggio Calabria, Italy.

SANKET CHAUHAN, MD - INDIA, 2012-2013
Sanket Chauhan, MD was educated in India before applying for the SimPORTAL fellowship and was the first ACS AEI Accredited Fellow. During his time at the center he focused on several things. Dr. Chauhan wrote the Fundamentals of Robotic Surgery psychomotor skills curricula, which consists of 7 tasks. Additionally, he wrote the curricula for basic and advanced robotic skills assessment based on VR based robotic surgery simulators.

After completion of his fellowship, Dr. Chauhan accepted a position with Baylor University Medical Center as the Medical Director of their Academic Medical Center. Under his leadership, he has tripled the number of “learning hours” in the space and added more than $1 million in simulators for resident practice and teaching. He credits much of his center’s success to Dr. Sweet and the SimPORTAL ACS Fellowship program as it helped him develop a blueprint for a great simulation center.

History
Recognizing the need to train individuals to carry out the mission of the ACS AEI Program and spread the benefits of the AEI worldwide, the program known as SimPORTAL (Simulation PeriOperative Resource for Training and Learning), at the University of Minnesota, became a Level 1 Comprehensive Education Institute in 2007. By achieving this accreditation, SimPORTAL was able to secure funding and developed a series of one-year surgical simulation fellowships with a comprehensive curriculum to train international leaders to be facile in the emerging field of simulation science.

The goal of this program was to provide a foundation for creating international leaders in the development, evaluation, and delivery of medical education curricula enhanced through the use of simulation technologies. Once this one-year fellowship was completed, the Surgical Simulation Fellow would be knowledgeable about simulation education theory, competent in its practice, and interested in further developing his or her own technical skills through an array of simulation activities. The fellow’s “thesis” project was to create a blueprint for developing the center in their home country.

Between 2007 and 2012, the ACS took the concept under consideration. In 2012, renewed interest in technology-based education combined with a definite need for leadership and collaboration led to the development of a committee to create a fellowship in simulation-centered education based within the accredited AEIs.

Mitchell Goldman, MD, FACS, chair, department of surgery, University of Tennessee-Knoxville, was selected to serve as committee Chair, and Robert Sweet, MD, FACS, was chosen to serve as Vice-Chair. (Both physicians are co-authors of this article.) Committee members included the following individuals: Raj Aggarwal, MD, PhD, FRCS, Imperial College of London; Karim Qayumi, MD, PhD, FRCSC, University of British Columbia; Carla Pugh, MD, PhD, FACS, University of Wisconsin-Madison; and John Paige, MD, FACS, Louisiana State University, New Orleans. Under their leadership and with the hard work of the ACS AEI staff, a new fellowship program was created. Development of the standards and criteria for the fellowship program was a committee-wide effort. Each member provided unique experiences and views, which resulted in the creation of a strong and rigorous fellowship program.

Perspectives on the following topics were shared in the development phase: components of the curriculum that a fellow would undertake during the year-long fellowship; templates and documents to capture the processes involved in training the fellow; examples to be included in the application to demonstrate compliance; and policies and procedures that would guide not only the overall program, but also the leadership of the individual program and fellow.